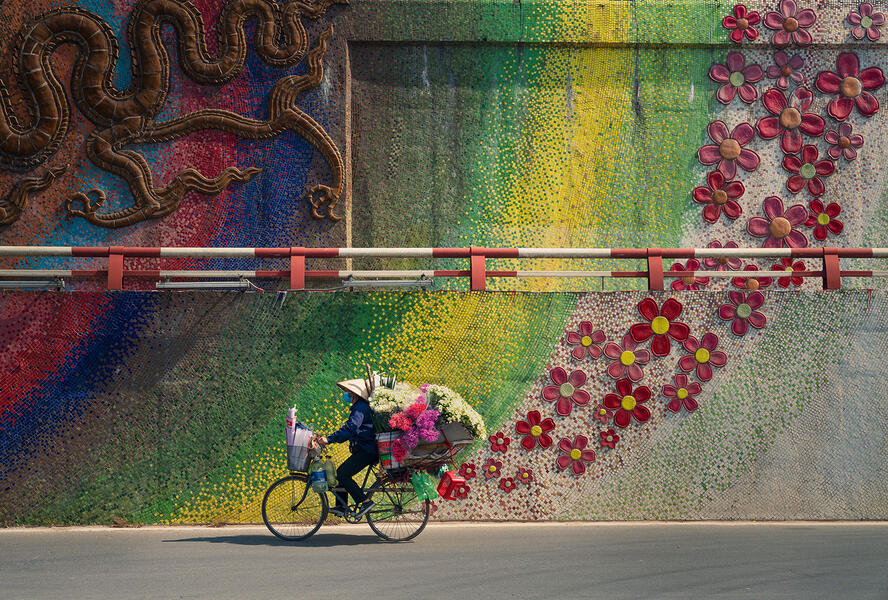 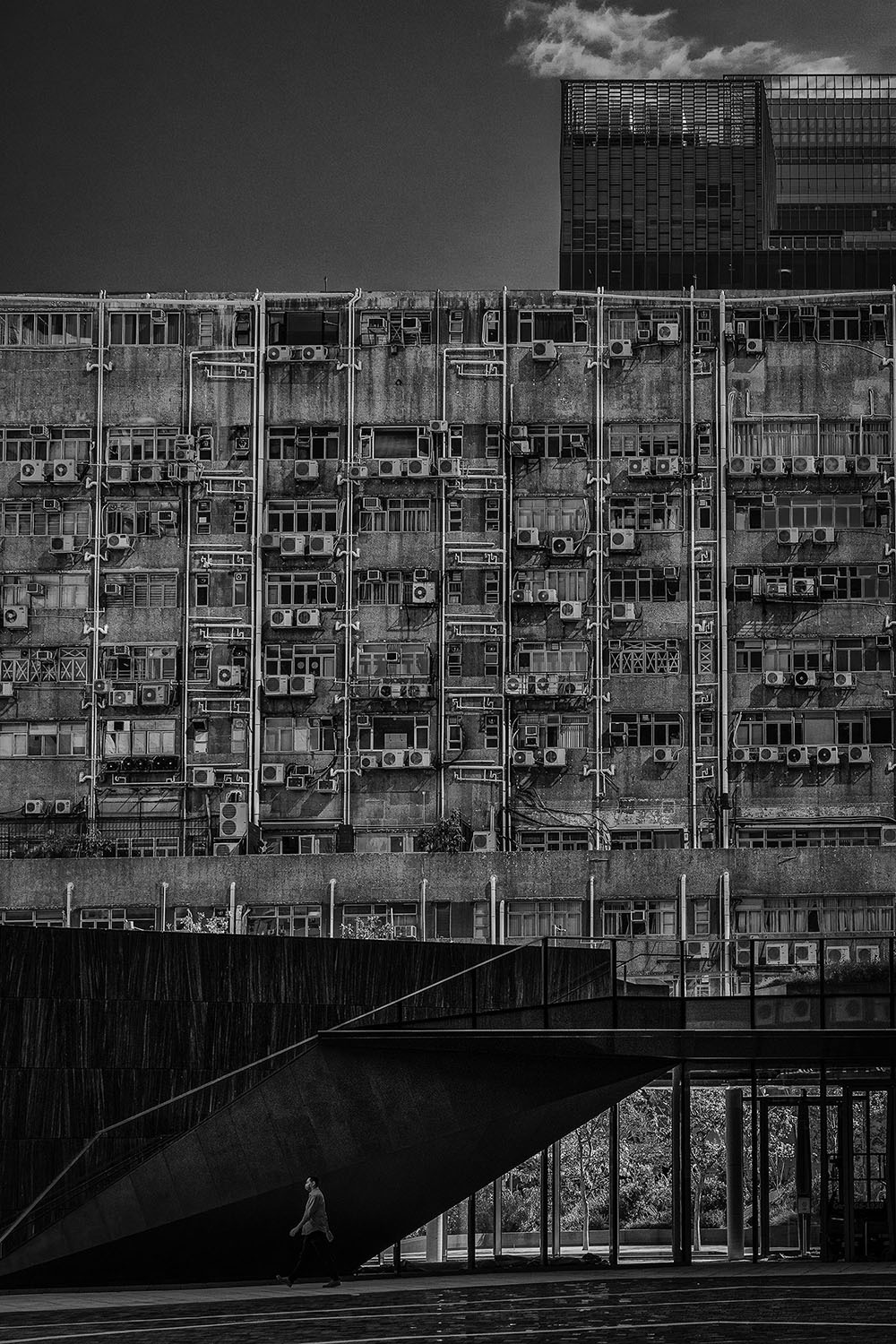 Anthony Chan (Hong Kong) for Old Meets New, a black and white photograph depicting the chaotic façade of a weathered industrial complex, juxtaposed with the stylish front entrance of a skyscraper. The image highlights a clash between the past and the present in Hong Kong by contrasting the co-existence of old and new developments. 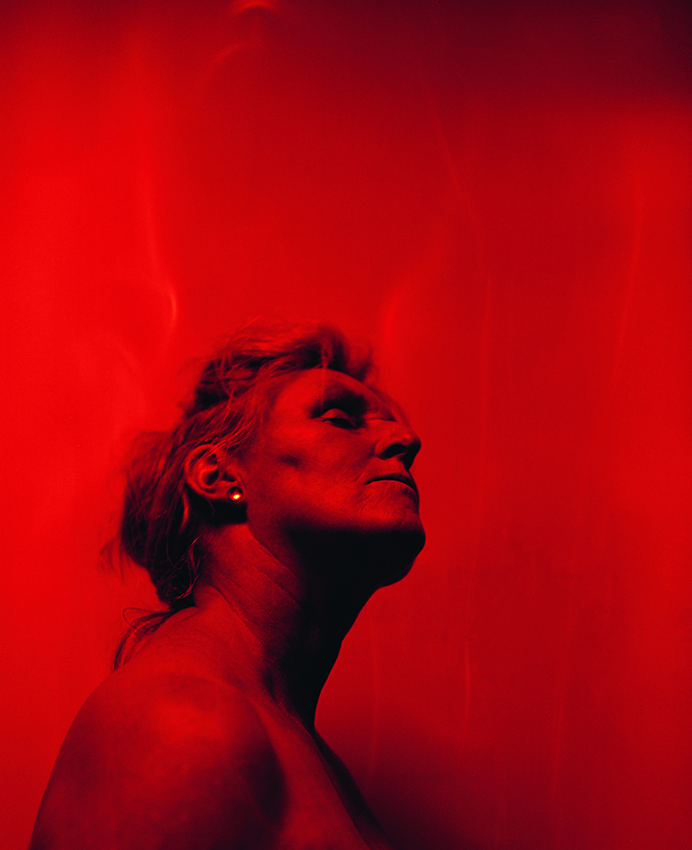 Isabel Salmon (United Kingdom) for Untitled, in which the photographer documents her mother’s experiences with chronic vertigo and dizziness. In this portrait Salmon explores the senses; shooting her Mother with her eyes closed in a stark red light, head titled as if trying to find balance. 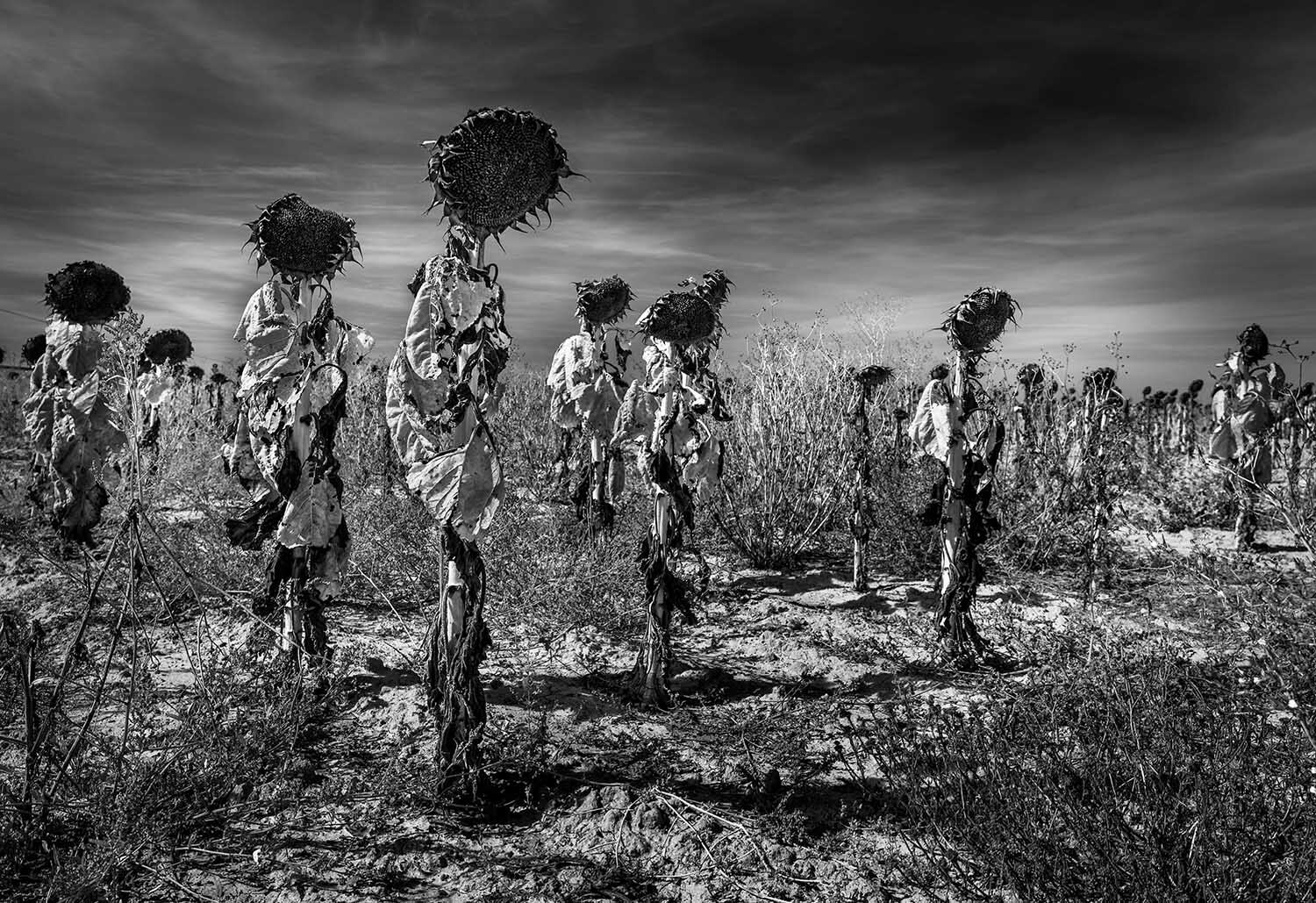 Vicente Ansola (Spain) for Exodus, an evocative image of a field of wilted sunflowers dried out by the beating sun in Castilla León. The photographer’s imagination was caught by the proud stature of the flowers, recalling for him the rural past of Spain, and the women who worked the arid fields of Castilla.

Utsab Ahamed Akash (Bangladesh) for The Honey Collector, capturing a honey collector from below as they inspect a tray of honeycomb. A typical countryside scene in Bangladesh, honey collectors place bees’ nests near mustard fields and collect the honey in winter.

Raido Nurk (Estonia) for Surfing festival, a shot of a stormy day of surfing in the Hague, the Netherlands. The stark silhouettes of surfers stand out against the grey waves and driving rain.

Scott Wilson (United Kingdom) for Anger Management, a dramatic black and white photograph of a wild mustang stallion, bowing its head as it kicks up a dust storm in northwest Colorado, United States. 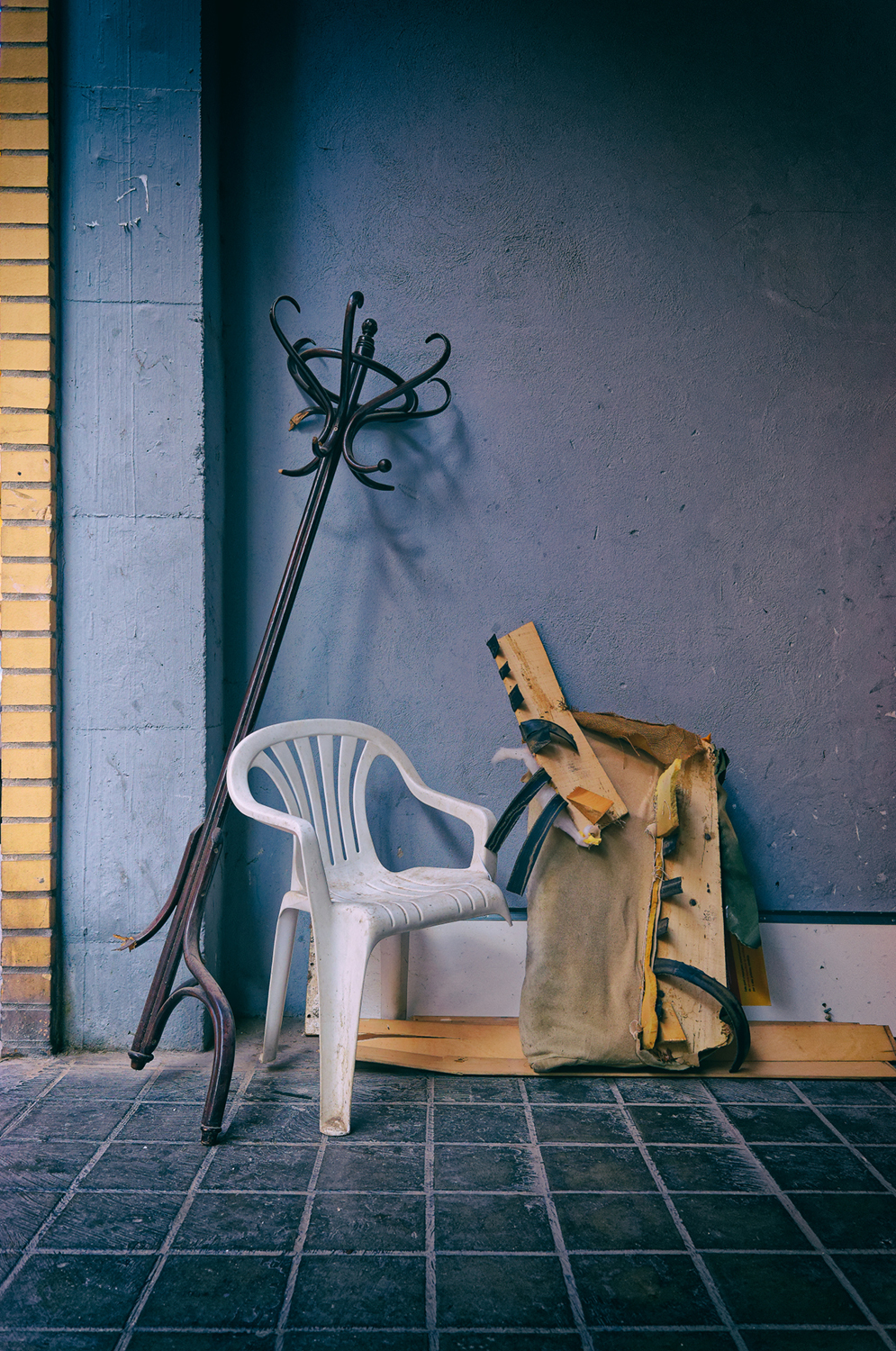 Leonardo Reyes-González (Mexico) for Segundo Uso (Second Use) II, a still-life of discarded objects. Assembled together against a blue wall, a balanced broken hat stand and a three-legged chair take on a new elegance. 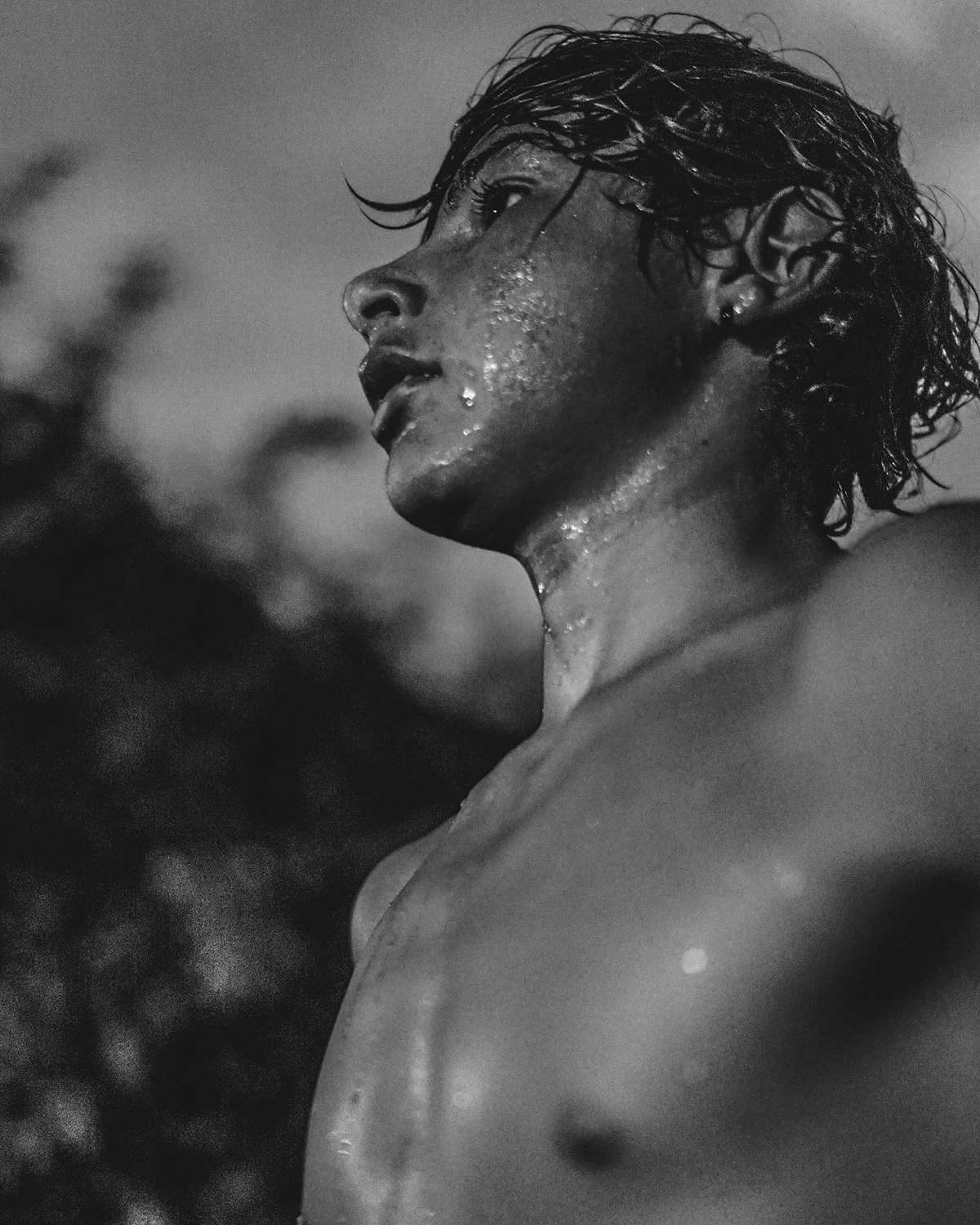 Simone Corallini (Italy) for The Endless Summer – Surf Trip, a black and white portrait of 16-year-old surfer Simone Gentile. Corallini captures Simone fresh from the sea, with beads of water running down his cheeks.

Etienne Souchon (France) for Havana Running Away, a photograph showing a split-second moment as a child runs across a street in Havana, Cuba, turning to look behind him at a car blocking the road. The black and white format, crumbling building facades and vintage car give the image the appearance of a classic street scene.

Nguyen Phuc Thanh, Vietnam (Vietnam) for Bike with Flowers, an image depicting a traditional flower street seller cycling  in Hanoi, Vietnam. The bike has been shot just as it passes a wall bursting with flower decorations, giving the appearance that they are spilling from the rider’s baskets.